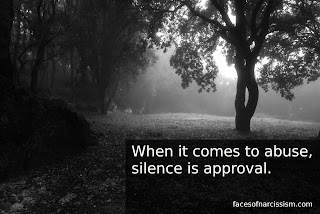 Enabling mother (EM) is the last of the key players in my Narcissistic Family of Origin (NFOO) and this is by far the hardest post for me to write. I still have memories, from early childhood, of a sweet and loving mother. Somewhere along the way that all gradually changed until, perhaps for self-preservation, she morphed into an enabler who would sit silently while NF delivered verbal and sometimes physical abuse to her children. Afterwards, she would berate us for "upsetting" our father. How I longed for her to, JUST ONCE, admit that HE was wrong!

In retrospect, I realize she was also narcissistic in her own right. Unlike NF, she was a quiet manipulator who left me feeling guilty and initiated the "call backs" that sucked me into my old role as family caretaker/doormat. I can never forget, that she's also the one, who when I called to say my husband had died said, "Good. Now you can see us more often."

After almost three years of very limited contact, imagine my shock when I recently discovered that EM was now the target of NF's bullying tactics. I'm ashamed to admit that I assumed HER role and stayed quiet, with thoughts like, "Karma's a bitch." and "It's your turn." running through my shell-shocked mind.

Back home I was hit with an epic anxiety attack. It was triggered in part by witnessing the kind of emotional abuse I was subjected to as a child, but mostly by the realization that I was capable of  staying silent. That's when I became determined use my caretaker skills to do for my dying mother what she had never done for me; get her to a safe place.

Posted by mulderfan at 2:00 AM